Fairfax, Virginia has strong historic roots and has played a significant role in American history. During your visit to Fairfax County, take the time to visit some of the area’s most diverse historical sites. Explore the following historic buildings and sites on your own or call the Fairfax Museum and Visitor Center and ask about their guided walking tours. 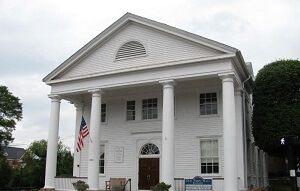 Built in 1900 by Joseph E. Willard, the Old Town Hall in Fairfax, VA is the architectural cornerstone of the city. The Hall was a gift to the citizens of Fairfax and has maintained much of its original features, including the floors, woodwork, and stairway.  Old Town Hall was built by Arthur Thompson, a local contractor who created the building with a classical revival style. Today, the Hall is available for events like wedding receptions. 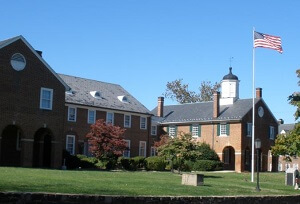 Located at 4000 Chain Bridge Road, the historical Fairfax County Courthouse is a national landmark and the seat of Civil War activity. The Courthouse was built in 1800 and the site where the first officer casualty of the Civil War occurred. Captain John Quincy Marr was killed during a battle between the Union cavalry and the Confederate Warrenton Rifles. Today, the Courthouse houses the Fairfax Juvenile and Domestic Relations General District Court and Clerks Office.

The Old Fairfax Elementary School, now known as Fairfax Public School, is a school building consisting of two sections built in 1873 and 1912. The two-story brick building features a classical revival style supported by three columns and topped with a rectangular, hipped roof. It was used as a school until 1925 when the building was then brought by the Cavaliers of Virginia, Inc., a chapter of the Ku Klux Klan. In 1932, a fire damaged the building. It was later repaired in 1937. It was then used as a school administration building and then housed the Northern Virginia Police Academy.

The Marr Monument was created to memorialize Captain John Quincy Marr, the first Confederate officer to be killed during the Civil War. Marr commanded the Warrenton Rifles during the Union cavalry attack that occurred on June 1, 1861 at 3 AM. Marr’s body was later found about 800 feet from the Court House in a clover field.

Built in 1812, the Ratcliffe-Allison House is a historic home with two sections built in 1810 and 1830. The two-story, single-pile brick building is one of the oldest residences in the city of Fairfax. Today, the house has been converted to a museum and features exhibits that display the activities performed by the homes previous 12 owners. These illustrations are designed to show visitors how life was during the 19th and 20th centuries. In 1973, the historic home was donated to the City of Fairfax by its owners.

Fairfax has many tangible reminders of local heritage in the form of historical buildings and sites. Each displays a crucial role of northern Virginia’s part in American history and the Civil War.

Next-> History of Fairfax, Virginia