Tysons Corner, or Tyson’s for short, is an unincorporated community in northern Virginia. The census-designated place (CDP) lies within the Washington Metropolitan area and can be found between the town of Vienna and the community of McLean. Tysons has a long, rich history dating back to 1852 when William Tyson bought land from A. Lawrence Foster at the intersection of Route 123 and Route 7 in what was originally a farming community known as Peach Grove, Virginia. Learn more about the interesting history of Tysons Corner and how it has come to be a flourishing metropolis.

From 1854 to 1866, William Tyson remains postmaster of the Peach Grove Post Office which had been established in April of 1851. During the 1850s, the area was home to a thriving peach grove. Just a few short years later in the 1860s, Tysons Corner was traversed by southern and northern troops. In preparation for the construction of a Union signal tower and stockade, thirty acres were cleared. Tyson’ continued to gradually grow until the 1950s when the farming community opened its first general store at the intersection of Route 123 and Route 7. More small stores started popping up across the town, including a fruit stand ran by William Tyson himself. 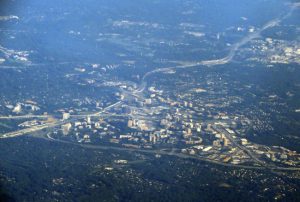 Major changes came in the 1960s when Tysons transformed from a country crossroads to a major commercial urban area. In 1962, the Fairfax County Board of Supervisors authorized the Tysons Corner Shopping Center, now known as Tysons Corner Center. The shopping center was designed to span over 88 acres bordered by Leesburg Pike, Chain Bridge Road, and the Capital Beltway. When the mall finally opened in July of 1968, it was proclaimed by developers as the largest enclosed mall in the world.

Throughout the 1970s and 80s, there was a noticeable shift in traditional business functions from the downtown area to the suburbs. This change turned Tysons into a bustling retail and employment center. More than 100,000 jobs became available and people came all over to snatch up these career opportunities. By the time the 1990s rolled around, Tysons had become a thriving corporate center with more than 2,100 acres of businesses. Later in 2009, the town began construction of the Dulles Corridor Metrorail Project which started along Route 123. The plan was to create a tunnel that would carry the rail line from Route 123 to Route 7.

Fairfax County announced the creation of the Tysons Comprehensive Plan in 2010. This plan had several focus ideas in mind, primary making the town a place where people can work, live, and play. This plan is still in place and is set to complete in the year 2050. Shortly after the Washington Metro Silver Line completed in 2014, the nonprofit association Tysons Partnership began to rebrand the area as Tysons, dropping the “Corner” from its name. As of 2015, the name was officially changed by the U.S. Census Bureau. Tysons continues to be a quickly developing town with a bright future and unforgettable history.

Next -> Where to Shop in Tysons Corner, Virginia