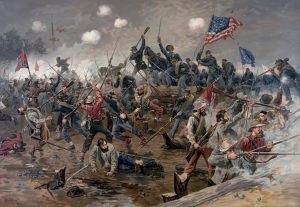 Though few relics and landmarks remain, the area of Chantilly Virginia is rich with Civil War history. Originally the site of a several colonial plantations, Chantilly gets its name from an early-19th-century farm and mansion that was located on the north side of what was originally the Little River Turnpike. Built on land inherited by Cornelia Lee Turberville Stuart from her father’s estate in 1817, her husband Charles Calvert Stuart incurred a substantial amount of debt to his Sully neighbor Francis Lightfoot Lee in 1847, and used the Chantilly farm and mansion as collateral to secure the note. When he died three years later, it fell to the Widow Cornelia to repay the debt. With the assistance of her son Sholto Turberville Stuart, who acted as her agent and managed farm, the debt was repaid in 1853.

Like his father before him, Sholto Turberville Stuart used slaves as farm laborers and house servants at the Chantilly Farm. Four slaves managed to escape with the help of a local abolitionist in 1855, but Douglas Riley, Trolious Riley, Henry Riley, and Vincent, with a $400 bounty on them, were all recaptured in Point of Rocks, Maryland.

During the Civil war, Chantilly was occupied as a Federal cavalry headquarters, first by General Stahel, then by Col. Percy Wyndham. The house was deserted by the Stuart family in October 1862, with all of the furniture removed except for one mahogany sideboard that was too heavy to lift. The house continued to fall into disrepair and ruin for the next year as calvary troops and horses camped on the property until the mansion was destroyed by a fire in 1863.

There was some initial speculation that the property was destroyed when Federal troops mistook it for Confederate General J.E.B. Stuart’s property, or that it was destroyed by guerrillas led by Elijah V. White. However, it turned out that the Chantilly Mansion was actually burned down at the hands of drunk federal troops.

Following the war, in 1865, Cornelia Stuart needed to borrow $5,000, and Chantilly was used, again, for collateral. When she died in 1883, Cornelia was still deeply in debt, and Chantilly farm was sold to repay her debts to George W. Powell, who purchased the 127 acre farm and its four remaining tenement houses and barn in 1888. The Powell’s kept Chantilly in the family until it was purchased by C. E. and Edith Hutcheson in 1943.

Although the village of Chantilly had grown steadily after the installation of Little River Turnpike in the 19th century, the largest population boom came after the construction of the Dulles International Airport. When the site was selected by President Dwight D. Eisenhower in 1958, the 87 predominately African-American owned homes in the community of Willard were condemned and demolished, and the airport was constructed. The Chantilly community as we know it now began development in the 1980’s in the farmland adjacent to the airport as suburban and commercial areas were built over the next four decades.